The Australian Red Cross Society (ARCS) was formed soon after the outbreak of World War I. It raised large sums of money to provide comforts for soldiers overseas, and its volunteers made huge quantities of clothing for soldiers, such as socks, mittens and pyjamas. Other volunteers packed the donations to be sent to Britain and the front line of fighting. To the soldiers, especially those at the front, they were a great comfort. The Red Cross also helped in supplying families in Australia with information about wounded and missing soldiers, and in supporting Australian Prisoners of War. Red Cross Voluntary Aid Detachments at home provided nursing and domestic services in hospitals and convalescent homes.

These services continued during World War II, as well as other services such as hospital visiting, home help, library services, and lorry and ambulance driving.
Since 1944 the Australian Red Cross has had official recognition as an auxiliary to the medical services of the Australian Defence Forces. 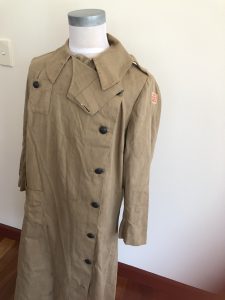