The mood at the send-off for Oakleigh troops to War in 1914 was one of lightness mixed with bravado; it served to keep the ceremony upbeat. Enlistees were pinned with a medal naming the recipient as a soldier of the Empire, and inscribed ‘from Oakleigh residents, Sept. 4 1914’. Twenty-two were so honoured in 1914; a third of them did not return.

Oakleigh, a small borough south-east of Melbourne, enlisted ten percent of its population, but over sixty percent of them became casualties affecting the entire community. Of the Oakleigh men that enlisted 68 were memorialised on existing rolls as those that had paid the ultimate sacrifice.

On average those enlisting were in their twenties and single; some were underage. About half were killed in action and almost as many died of illness as died of wounds. One drowned on leave behind the frontlines. Another soldier, long returned from the war, died in 1919 of pneumonic influenza during the global pandemic. On 25 April 1915 – the day Australian troops landed on the Gallipoli Peninsula – Frank Brennan and Guy Sloggatt were both killed in action. On that same day Arthur Lacy was wounded and died after evacuation to Malta.

Commonly, more than one family member enlisted. Four sets of brothers failed to return including the Dixons.

S. (Archibald Sydney) Dixon (1895- 1918) was the eighth of ten children born to William Dixon a laundryman, and his wife Eliza née Crane. At school, Archibald Dixon served with the Senior Cadets and went on to join the 46th (Militia) Battalion. The outbreak of WWI saw the Dixon family living in Clyde Street, Oakleigh.  Declaring that he was a self-employed clerk, Archibald Dixon was a very early enlistee.  He joined up in Ripponlea on 19 August 1914 and was allocated to the 5th Infantry Battalion, with Service Number 811.

S. Dixon embarked on the transport HMAT A3 Orvieto on 21 October 1914 in the ‘first fleet’ of the 1st AIF. Hurried training in Egypt followed before the 5th Battalion was hurled at Gallipoli on 25 April 1915 as part of the attack by Allied forces against Turkish positions there. Promoted to Corporal at Gallipoli, Dixon returned to Alexandria in January 1916 and went on to France with his battalion, disembarking at Marseilles in March 1916.  The now Sergeant Dixon was wounded in action on 18 August 1916, and was sent to England to recover and take leave.

After re-training in Woolwich and a short stint with the 65th Battalion, Dixon was transferred back to the 5th Battalion, re-joining his battalion in the field on 30 June 1917.  On 27 October that year, as the 5th Battalion relieved the 7th Battalion on Westhoek Ridge, Dixon was again wounded, this time by a poison gas attack (the Germans may have attacked with gas to disrupt the handover).  Once again he was sent to England to recover.  However, the results of this wounding were so serious that he was not fit enough to continue. He was sent back to Australia on RMS Osterley in April 1918.

S. Dixon was discharged in Melbourne in May 1918. He was sent to the base camp at Enoggera in Queensland, presumably for the benefits that a hot climate was thought to bring to those with the pulmonary tuberculosis associated with the results of gas poisoning. On 31 August 1918 Dixon died from the wounds he had received while on active service.  He was buried in the Methodist section of the Toowong cemetery, far from his home in Oakleigh.  He was posthumously awarded the 1914-15 Star, British War Medal and Victory Medal.

C. (Albert Charles) Dixon was the fourth child of ten children born to William and Eliza Dixon. Albert was an unmarried building contractor living at Euston Road, Oakleigh when WWI broke out and enlisted in 1915 and was allocated to the 24th Infantry Battalion with Service Number 870.

C. Dixon embarked on 5 May 1915 on HMAT A14 Euripides, and upon arrival in Egypt, was immediately deployed to Gallipoli. Dixon served on Gallipoli until the evacuation in December. After his unit reinforced and retrained in the Canal Zone in Egypt, it was embarked for the Western Front, and arrived in Marseilles on 26 March 1916. A month later, at Fleurbaix, he was promoted Sergeant, but in July, Dixon requested to return to the ranks.

On 27 July Albert was wounded in action and evacuated to the No.13 General Hospital in Boulogne. Recovered by 24 August, he returned to the field. He rejoined the 24th Battalion as it prepared for battle, as the 24th and the 21st Battalions were engaged in the final stages of the attack on Mouquet Farm. On 26 August the units advanced under a creeping artillery barrage which began at 4.45 am. Bombing parties tried to flush the Germans from their underground bunkers but failed as the Germans re-emerged and repulsed the attack.

Dixon was one of forty-four men killed and 168 missing with another 568 wounded – in effect the battalion had been destroyed in the fighting over the five days to 27 August. He was posthumously awarded the British War Medal and Victory Medal and with no known grave, memorialised on the Villers-Bretonneux Memorial in France. 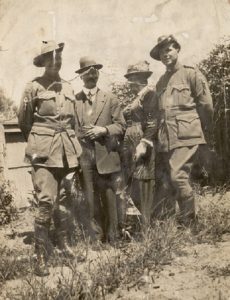 Your ticket for the: ANZAC DAY TRIBUTE 2020 – THE DIXON BROTHERS