If you live in a smallish (or once-small) Californian bungalow whose external features resemble those of others, then there is a good chance that your house was once a “bank house”.  “Bank houses” were financed by the State Savings Bank of Victoria in the early twentieth century through the Credit Foncier scheme.  A study of this important housing finance scheme offers fascinating contrasts to the current housing affordability situation.  It also helps us to understand one of main drivers for housing development in Oakleigh.

During the Depression years in Victoria in the 1890s, many farmers faced severe financial hardship. [1] With crippling, short term mortgages (whose extension involved re-financing costs), and reduced demand overseas for Australian exports, many farmers needed assistance.  The Consul to Victoria for Austria and Hungary, Mr Carl Pinschof, observed their struggles and believed that he had a solution which could help, putting this to the Melbourne Chamber of Commerce and Industry in a speech in 1892.  He recommended the Credit Foncier (ie credit founded on land) scheme which had operated in Austria and Hungary and which involved long term loans with low interest rates (preferably no higher than 5%), paid off in half yearly instalments which covered interest and principal.  His suggestion aroused press interest as being a way of helping farmers.

The Secretary to the Commissioners of Savings Banks in Victoria[2], George Emery, was asked to investigate whether the Savings Bank could operate such a scheme.  He found that it could and the Credit Foncier scheme for primary producers commenced in May 1894.  It became popular and was said to encourage “thrift, economy and industry” amongst its recipients.  [i]  Rather than using the bank’s depositors’ money to finance the Credit Foncier loans, the Bank floated mortgage bonds on the market, guaranteed by the Government of Victoria, at a rate of 3.5% p.a.  These bonds were later replaced by Credit Foncier debentures and stocks, also secured and guaranteed.

Until 1910 the Credit Foncier scheme was focused upon assisting farmers, and it met with increasing demand from that group.  But the benefits were so apparent that there were calls to establish a similar scheme for city people.  By 1910, under Act No. 2280, the Credit Foncier Department of the Savings Bank was empowered to provide loans on houses and shops.  The title to the land was to be the bank’s security.  This scheme enabled many Victorian families to buy homes of their own.

George Emery, a man of humble origins who became Inspector-General of the State Bank, is credited with working tirelessly to achieve the goal of greater home ownership in Victoria. [3]  One of his achievements was to instigate legislation in the Victorian Parliament (the 1920 Housing and Reclamation Act ) to facilitate loans on generous terms to people on an income of less than £400 per annum who did not already own a home.[4]

The value of the property for which Credit Foncier loans could be given was initially capped at £800, which Included cost of land (around £100 and £200 for a block in what was then the outer suburbs), construction, sewerage, outbuildings, fencing, lighting, water supply and drainage.  Applicants also had to pay for the house plans and supervision by a clerk of works.  Borrowers needed a deposit of 10% of the total.  The loaned amount was repayable monthly at 8.5% p.a, including interest at 6.5 % p.a. [5] If the interest and principal were paid monthly at 14 shillings and 2 pence for every £100 borrowed, then the loan would be paid out in 22.24 years. [6]  Borrowers were obliged to pay rates, taxes, keep the property in good condition and insure the property through the Bank’s own insurance scheme. People who took out the loans would ultimately have purchased the dwelling from the Bank.   No sale at a profit was allowed until at least two years after the contract of sale.

The first of such housing loans were granted in March 1921 and by 30 June 1921 there had been 1052 applications.  Demand for the Credit Foncier mortgages rose each year.  The Bank began to call for tenders for constructing  the homes to its standard plans and specifications.  By late 1922 the Bank called for tenders every four weeks, with 100 in each tender period, resulting in 1300 new homes in that year.

To keep the cost of houses low but the quality of construction high, the Bank established its own Building Department “to design and supervise the erection of the low cost houses”.[7]  Early in the scheme, however, (1921) it was found that brick houses could not be built within the capped price of £800, so houses within this limit had to be built of wood.  In December 1922 the capped price for timber houses was raised to £850 and that of brick houses to £950.  This increased again in 1927.

Bank houses were built to last. “While bank houses may have been Spartan, they were well built.  Estate agents used the bank’s name freely to boost sales and many young bank staff members used them as first houses.”[8]  Specifications for materials included:

Even fittings such as bath, basin, and cement wash troughs had specifications. 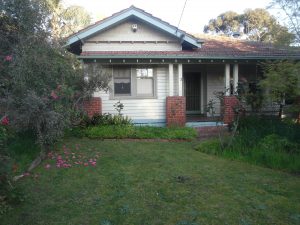 In 1930, however, the Depression intervened and the Commissioner of the State Savings Bank decided to put on hold Credit Foncier loans of any type, except for improvements, repairs and renovations – and all under tight supervision.   During this period, the Bank was a ” benevolent landlord”.  To assist its mortgagees, it reduced interest rates on loans in 1931 to a maximum of 6%. (The rate had peaked at 7% in the late 1920s.)  The interest rate was reduced further, to 4.5% in 1934. People struggling to pay off their mortgages were interviewed by the Bank with the aim of helping them to maintain their mortgages and homes.  They were given advice on their family finances, and repayments were often reduced to interest only.  The introduction of weekly repayments, although more work for the bank, helped families to budget better.  As a result, many people retained their homes and farms.  By June 1934, 8180 loans had been issued, 7380 houses erected and 2040 had been purchased.

It is possible to see an original copy of the State Savings Bank of Victoria “Design Book for Timber Dwellings” at the State Library of Victoria. It is dated 1936, cost two shillings and sixpence, and contains thirty-five designs by architect A. Burridge Leith.  Whilst the design books in earlier years predominantly featured Californian bungalows, later editions featured a wider range of styles, such as Spanish Mission[10].  In this copy a separate list provided by the Master Builders Association costs the various designs, such as £614/0/8 for Type 19, house alone (ie excluding fittings, fence, sewer etc).

As Graeme Butler noted, the heyday of Bank houses came to an end as World War II loomed.[11]  World War I had ushered in the Bank house era; the next war‘s shortage of housing materials and labour diminished the influence of the Bank over designs and supervision of the building.[12]

In Oakleigh, the early 1920s saw the subdivision of much market garden land and other large land holdings.[13] Helen Gobbi has noted that many Bank houses were built in Oakleigh by builders such as Jim Fisher, Tom Densley, Hansford Bros and Wally Horn.  The latter built around thirty houses in Westgate Street.  Robert Muir is said to have built around 150 in the streets off Carlisle Crescent and Willesden Road. Oakleigh is therefore well represented in Bank homes, which is not surprising given the low incomes  of many of its new residents in the early nineteenth century.

It is impressive, I believe, that our forebears in the early twentieth century had the foresight and compassion to find a scheme for affordable housing for those on lower incomes, such as returned servicemen, widows, immigrants and labourers.  They surely would be pleased to see that such houses, when well cared for, now create charming streetscapes in the City of Monash and other areas, and in many cases are well loved a century later.

Trevor Craddock and Maurice Cavanough:  125 years the story of the State Savings Bank of Victoria. 1967

[1]: R.V. Jackson:  Australian economic development in the nineteenth century.  ANU Press 1977. : “There is no doubt that the depression of the 1890s was much more severe and more protracted than any that Australia had previously experienced.” P. 23

[4] George Emery is also credited with instigating the Garden City development at Fisherman’s Bend, where the Bank purchased 45 acres of land for £62,430 and built 184 houses at an average cost of £999 each.  The development included a central reserve, a recreation ground, shopping centre and roads and footpaths, the costs of which were included in the capital cost of the buildings.  Houses were semi-detached, of six designs to avoid monotony.  Purchasers paid and 50 pound deposit and the cost of supervision and legal fees, and were able to access Credit Foncier loans. The development became a highly prized piece of housing.

[5] From November 1919, returned soldiers were granted loans at 0.25% less than the standard interest rate, where the latter was greater than 5%.  Cooch, Alex:  The State Savings Bank of Victoria.  Its place in the History of Victoria.  Melbourne 1934 p. 184

[13] “New houses were being knocked-up rapidly in metropolitan Melbourne, at a rate of close to two hundred per week. To facilitate this growth in Oakleigh, in 1921 Council adopted rating on the unimproved value, effectively compelling the subdivision of large holdings of privately owned land. Five years after rating on the unimproved value, only 800 of the town’s acres were un-subdivided and 270 of those were owned by the golf and hunt clubs.”  Gobbi H.G.:  Taking Its Place: A History of Oakleigh 2004 p. 161HH H. G

Your ticket for the: BANK HOUSES