Few people nowadays would recognise the name of Dorothy Gibson from Oakleigh, Victoria.  Yet this woman was hailed by Australian historian Stephen Murray-Smith as a person whom history should not forget, and a “kind of latter-day saint”.[1]

Dorothy Gibson had a remarkable life of political action dedicated to world peace via communism, despite her comfortable, middle class upbringing in Melbourne.  Born Dorothy Alexander in 1899, her parents raised her and her brother, William, in their Denbigh Street, Armadale, home.  She was sent to Korowa girls’ school, which was then situated in Wattle Tree Road Malvern, from nine years of age.  Dorothy’s father apparently chose the school because he was impressed by the headmistress, Miss Ethel Akehurst, whom he saw as “independent-minded and spirited”.[2]  Dorothy was strongly influenced by Miss Akehurst, who told the girls to “always do what you are afraid to do”.  Dorothy claimed that this headmistress created a strong school spirit and Dorothy loved her school days, refusing to leave Korowa when at age 14 her parents suggested moving her to P.L.C.

Dorothy became head prefect in her last year of school, and Miss Akehurst’s testimonial to Dorothy included such praise as “I have never known Miss Alexander to turn from a duty nor to flag in the accomplishment of any work undertaken.  She has wide human sympathies. Her ideals are lofty….Her disposition is sunny, her enthusiasm contagious…” [3] Such was Dorothy’s loyalty to her school that, in association with others, she established the Old Korovians association, even though she later decried private education.

After matriculating, Dorothy attended the University of Melbourne from 1917 until 1919.  She graduated with a Bachelor of Arts in 1920 then undertook a Diploma of Education, but she failed the practical exam.  As a result, in 1922 she undertook voluntary work for some months in free kindergartens.  This enabled her to see the tough conditions of life in the poorest areas of Melbourne.

Dorothy travelled overseas with her parents in 1922, taught for one term at St Catherine’s School Toorak, then finished her Diploma of Education in 1924.  This enabled her to begin teaching at
St Andrew’s experimental school in Kew.  The experience reinforced her interest in new ideas on education. After St Andrew’s School closed down, Dorothy travelled overseas with her parents in 1929, studied at Cambridge University and spent a year in London, learning more about progressive education.  She subsequently had further travels to Europe and a short-lived marriage.

Dorothy’s left wing views were probably originally inspired by those of her father, a business man in the wine trade who owned a vineyard at Yering.   In the 1930s Dorothy became increasingly anxious about the spread of Fascism and sympathetic to the Soviet Union and pacifist ideals.  She was attracted to Marxism and secured a job teaching at the Hampstead, London, school for children of the Soviet Embassy.

In 1934 Dorothy was invited to teach at the Anglo-American school in Moscow.  She admired the way in which Soviet children were brought up and she became a more active pacifist.   After a year, Dorothy returned to Melbourne to organise her divorce.  She was interested in returning to Russia but was diverted by the need for helpers in Melbourne’s  anti-war movement.

Dorothy married Ralph Gibson, an active Communist, in 1937.  Their marriage was an extremely happy one, ending only with Dorothy’s death.  Before the war they lived in a flat in Hotham Street, East Melbourne, then a working class area.  Dorothy became very active in the Australian-Soviet Friendship League during World War II and worked for the Communist Party.

After Dorothy’s mother died in 1946, the Gibsons moved into her father’s home in Armadale to look after him.    By this time Dorothy was chair of the Malvern branch of the Communist Party. She held meetings but also gave talks to women about matters such as children’s health, whilst selling The Guardian (of which Ralph was editor) on Glenferrie Road.

Dorothy also did much work for the Australian Peace Council which was formed in 1949, and then its successor, the Congress for International Co-operation and Disarmament, formed 1959; both linked to the communist movement.  Dorothy was untiring in her organisational work to promote these.  In 1953 the Gibsons travelled to Europe, where Dorothy’s attraction to the U.S.S.R. deepened.  After their return in 1954, Dorothy bought and renovated a small home in Oakleigh, where the couple spent the rest of their lives.  Dorothy, according to her husband, really bought the home for its attractive garden.  Fittingly for the Gibsons, their street was named after Councillor Frank Richardson, a remarkable man who was the son of an African-American and an American Indian, who had worked in mines and shearing sheds, was a founding members of the Australian Workers Union, and an early Labor Councillor on Oakleigh Council.    The Gibsons found their new street to be more friendly than Armadale and they enjoyed watching the “Richardson Street scallywags” , as the local children were known, playing on the road.

Dorothy was very active in the anti-Vietnam war movement and assisted with the three moratoriums in Melbourne.  She helped to form the Oakleigh Moratorium Committee which met in the Oakleigh Council chambers, issued leaflets in Greek, Italian and English, and held a car cavalcade from Chadstone to Oakleigh shopping centre.  She received strong support from Monash University and Caulfield Technical College students.  Dorothy is credited with broadening the peace movement “by involving people of diverse backgrounds, political affiliations and faiths”.[4] She was undeterred by revelations of Stalin’s crimes and the Soviet repression of Eastern European nations.

Dorothy was a great supporter of the Tribune, the Communist Party newspaper.  Her efforts included hosting the annual Tribune fund-raising garden party at her own home, then at another local garden, over a decade.    Dorothy was an admirer of Paul Robeson, the famous black American singer (“Old Man River”,  “Steal Away” etc) and political activist.  She had met Robeson when he came to Melbourne in 1960 to give anti-apartheid speeches.  When he died in 1976, Dorothy instigated a memorial evening in Melbourne. Few people could resist Dorothy’s optimistic and persuasive encouragement to assist her causes.

But by 1971 she had been slowing down, due to ill health.  She and Ralph continued to enjoy time at a holiday cottage in Olinda, but she had trouble walking to the Oakleigh shops and more often just walked in her garden, which was still a great pleasure to her.

Dorothy Gibson died in January 1978 and Ralph wrote her biography  in 1980. Stephen Murray-Smith, who had worked with Dorothy during the 1950s at the Australian Peace Council in Melbourne, observed of their marriage that “…out of this remarkable working political partnership has come a moving story of the love of two people, united both in their vision of a better life and in an affection between them…”[5]  Dorothy has been credited with “broadening the peace movement by involving people of diverse backgrounds, political affiliations and faiths,”[6]  and she inspired young people to join political action against conscription and the Vietnam War.

This article was adapted from an article published in May 2020 in “On Broadway”, the journal of History Monash Inc (previously the Oakleigh & Districts Historical Society). 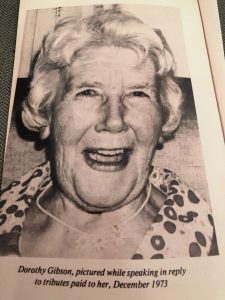 Your ticket for the: DOROTHY GIBSON: GARDEN PARTIES IN OAKLEIGH FOR COMMUNISM