An exhibition commemorating the centenary of the Oakleigh Memorial Hall was opened on Anzac Day, 25 April 2022, by the President of the Oakleigh-Carnegie Returned Services League (RSL), Doug Pendergast.

The exhibition was curated by Helen Gobbi, the historian of History Monash Inc. It included a wide range of artefacts related to the Memorial Hall and to those who served Australia and supported them in conflicts since World War I. The Memorial Hall in Drummond Street Oakleigh was designed by Henry Berry, architect and former serviceman. It was opened on 29 April 1922 by Brigadier-General H.E. “Pompey” Elliott.

The attached photo, taken inside the History Monash Inc headquarters at Monash Federation Centre, shows the chairs once used by the Presidents of the Carnegie RSL (right) and the Oakleigh RSL (left) sub-branches.
The exhibition was made possible through a grant to the Oakleigh-Carnegie sub-branch from the Veterans’ Council of Victoria. The exhibition has now closed. 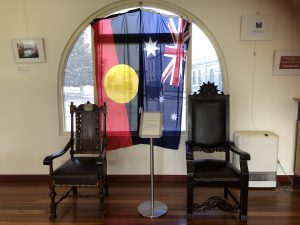 Your ticket for the: EXHIBITION TO CELEBRATE THE CENTENARY OF THE OAKLEIGH MEMORIAL HALL