The Memorial Gates outside Oakleigh Primary School were dedicated in March 1925. At that ceremony, the Lady Mayoress (the wife of the Oakleigh Mayor, Councillor Hughes, after whom Hughesdale is named) unlocked the gates for the first time. They were a tribute to those who served in World War I and followed the dedication of the Avenue of Honour in Drummond Street and the opening of the Memorial Hall in August 1923.

The gates were designed by Henry D. Berry , the architect who also designed Oakleigh Memorial Hall. Henry Berry was himself a returned soldier and the son of William Berry, an architect who contributed in many ways to Oakleigh’s development. For example, William Berry in 1909 designed a row of seven shops in Portman Street for local businessman Jerry Boland, who had correctly predicted that town business would move towards the railway station, away from Dandenong Road. Berry Snr also designed homes and businesses in Atherton Road and renovations of the Oakleigh Hotel (now the Leighoak) in Dandenong Road , and during World War I he led a local community group to make aids for injured soldiers .

Today the gates are located in Logie Street, but they were previously located on the corner of Warrigal Road and Logie Street, which is where the Victorian Heritage Register puts them.

At the time of the Memorial Gates’ construction, Oakleigh Primary School was much bigger than it is today: it had over one thousand students in 1922. Many thousands of Oakleigh school children, their parents and teachers have since passed through these gates which represent the gratitude of the Oakleigh community to its servicepeople. 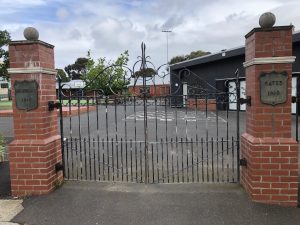 Your ticket for the: Oakleigh Memorial Gates