History Monash > The Battle for Oakleigh 1888 Part I

1888 was a particularly busy year in the life of the nascent Militia forces in Victoria. Formed in 1885 to replace in large part Volunteer forces which had been in existence since the mid- 1850s, Militia involvement in the social, civil and military life of this wealthy colony was already comprehensive and well reported.

In 1888, in addition to the traditional four day Easter camp, the Review on the occasion of Queen Victoria’s birthday, engagement in the Victorian Rifle Association matches and acting as guards and escorts for such duties as the opening of Victoria’s Parliament, the Militia also became involved in the major Centenary Exhibition of 1888.All of this on top of individual unit training, and social events for the small permanent staff and Militia officers.

In November of each year, on the occasion of the Prince of Wales’ birthday, a complex one day training exercise was also held to test in a ‘sham fight’ the operational skills and leadership of units and officers alike.In November 1888, the exercise was centred on the village of Oakleigh, established in 1853 and located 19 km to the south-east of Melbourne City.

This article focuses on that Oakleigh exercise.Some context is needed to understand why an exercise would even be held in this area.The annual Easter training camps had recently begun to be held at the newly established training ground at Langwarrin on the Mornington Peninsula 96 km south east of Melbourne.Langwarrin would, rather self-consciously, become known in time as ‘Australia’s Aldershot’.

From the early 1860s when Victoria’s Volunteer forces were themselves new there had been concerns that an ‘invader’ – at different times imagined to be French or Russian – could attack Melbourne overland from Western Port. By 1888, as the fortifications at the ‘Heads’ of Port Philip Bay continued to strengthen, an attack through the Heads became more problematical for any invader and a theoretical overland approach to Melbourne became a practical alternative to attacking through the forts at the Heads.

It was partly in response to this thinking that Langwarrin, squarely positioned between Western Port and the Dandenong track access to the inner approaches to Melbourne, gained prominence as a training ground from 1887 when encampments were first held there.[1]

So it became a regular occurrence for the smaller one day exercise in November of each year to be held on ground over which a potential enemy, if it took that route to Melbourne, might be expected to traverse.In 1887 the exercise was held on the approaches to Melbourne along the coastal track near the Port Philip bay-side town of Brighton.

In June 1888 it seemed like the real thing was going to happen when the telegraph lines to Europe were suddenly and inexplicably cut off – rumours of war in Europe flew about, fanned by local media. The Victorian Navy and garrison forts stood to their posts and the Militia was alerted.[2] When the reason for the cables being cut – volcanic activity in the Netherlands East Indies – became known, the alert subsided.Nonetheless, the false alarm added spice to the November exercise planned for 1888. 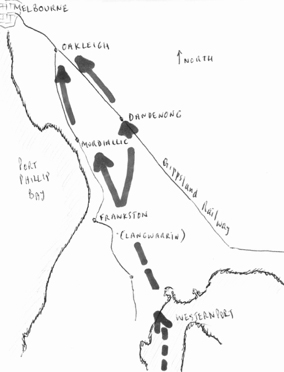 The exercise was held over ground leading from Dandenong through Spring Vale to the railway and road junction at Oakleigh village south-east of Melbourne.While Oakleigh’s railway did connect Melbourne city with the Gippsland farming districts of eastern Victoria (the Gippsland railway through Dandenong terminated at Oakleigh), perhaps as important was its road junction providing access to Melbourne from Dandenong.

Here the so-called ‘three-chain road’ provided a route from Dandenong which avoided the swampier, lower lying tracks closer to Port Philip Bay.From a training point of view, the country between Oakleigh and Dandenong was close to ideal.Sparsely settled, it was undulating and lightly timbered.

Oakleigh village itself and its principal businesses – such as they were – was aligned along ‘the Broadwood’, a small ‘straight’ section of Dandenong road between the track later known as Warrigal Road and the start of Fern Tree Gully Road.Kerosene lamps illuminated at night. With the opening of the railway not long before, land around Oakleigh was just starting to be developed in the urban sense.

But it was not yet settled around the railway station with its wooden building with station master living rooms, a waiting room and ticket office, completed in 1881. In fact around the period of the militia exercise, no less than seven estates were put up for sale. But Oakleigh remained very much a rural setting albeit important as a ‘grand junction’ of road and rail. [4] 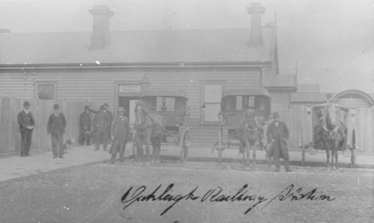 The boundaries of the manoeuvres were narrowly constrained – on the north-east side Dandenong Road and on the south-east side the railway line, divided north and south by Claytons’ Road which intersected both. The defenders were not allowed to move south of Clayton’s Road – and all enclosed and cultivated grounds were considered impassable.

The middle area of the exercise ground on the western side of Clayton’s Road held some farm holdings which the owners would not allow to be entered, although if the exercise was real the properties would have been used as positions as the two farmsteads each sat on higher ground.

Looking from the defenders’ main position on the high ground just east of Oakleigh (today’s Huntingdale) a clump of thick timber, midway between the two boundaries, came towards the defenders’ position in a ‘V’ shape, but on either side -almost clear of timber – there was a clear range for artillery. So movements were confined to a narrow strip about 6 km long and about 1.6 km wide at Spring Vale Road to 1 km wide at Oakleigh. [6] Essentially then, the confines provided little scope for tactical manoeuvre. Indeed, accounts of the exercise described it as ‘a hippodrome, the defence to get the winnings.’ [7] And so it proved to be.

A quick overview of the Militia and Volunteer forces in Victoria in 1888 will set the scene. Barely three years old, the new Militia forces – formed in a major reorganisation of the Victorian Defence Forces from 1884 – were still developing.The old Volunteer infantry, artillery and cavalry had largely been replaced by paid but part-time Militia forces which included a leavening of former Volunteer officers and men who carried forward their experience of part-time or actual soldiering as former British Army veterans.

They were supported by a small professional staff of permanent officers and non-commissioned officers who were mostly ex-British Army or seconded from the British Army. This included the commander of the Victorian Forces, Colonel Henry Studholme Brownrigg, [8] and a number of key staff officers. 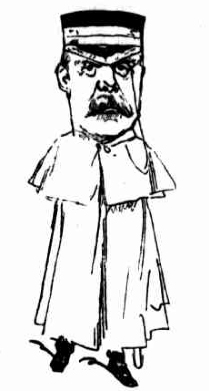 A new Defence Department – the only one of its kind in the Australian colonies – also developed a range of new organisations and technology to meet the challenges of modern warfare such as it was at the time. These included submarine miners, an ambulance corps, field and telegraph detachments of engineers, school cadets, an ordnance, commissariat and transport corps, mounted infantry and quick firing Nordenfelt guns both at the Heads and in the horse artillery.The ground forces aside, the colonial Victorian Navy was also a strong force on Port Phillip Bay and beyond, not least because its monitor, HMVS Cerberus, was still formidable.

The ground force structure of the Victorian Militia and Volunteers in 1888 consisted of the following:

The 1888 exercise to defend Oakleigh Station involved the metropolitan infantry battalions, field artillery, and other sub-units and supporting services. 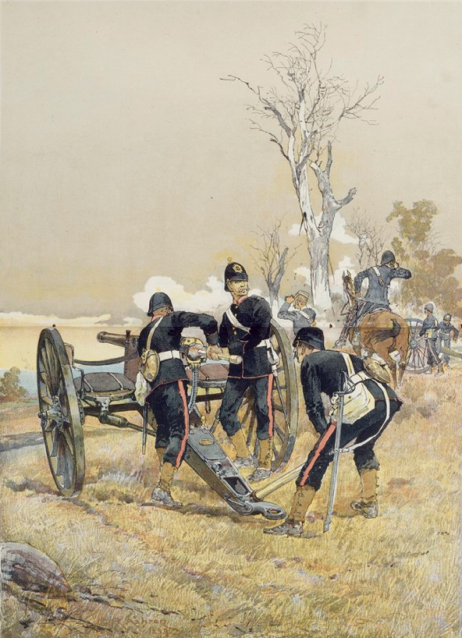 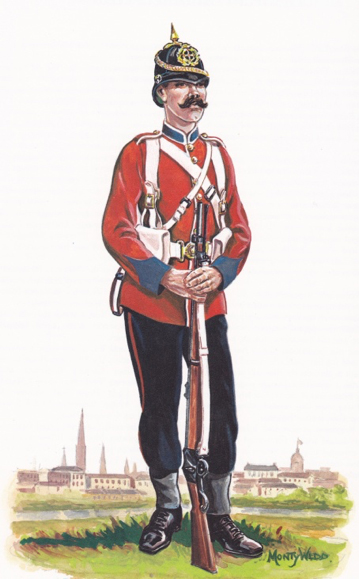 The advance guard of an attacking force (the ‘Red Force’) which had landed in Western Port Bay was advancing on Melbourne and aimed to capture Oakleigh village and railway junction. 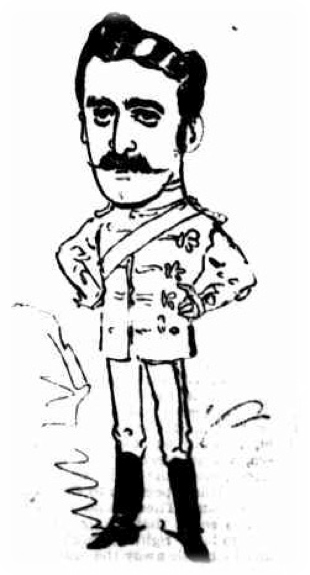 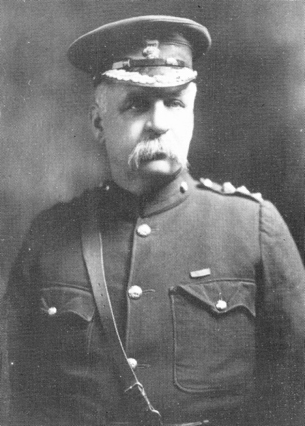 The attacking force was placed under command of Lieutenant-Colonel John Montgomery Templeton, a member of the Victorian Council of Defence and Chairman of the Victorian Rifle Association.[21] 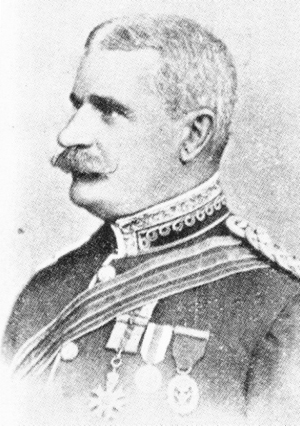 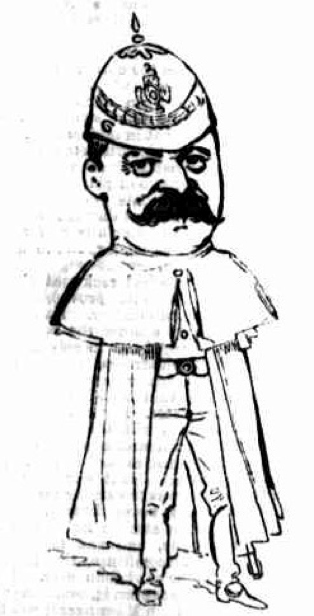 When news of the red force movements became known, Blue Force was sent to conduct reconnaissance and take up defensive positions east of Oakleigh.Blue Force consisted of: 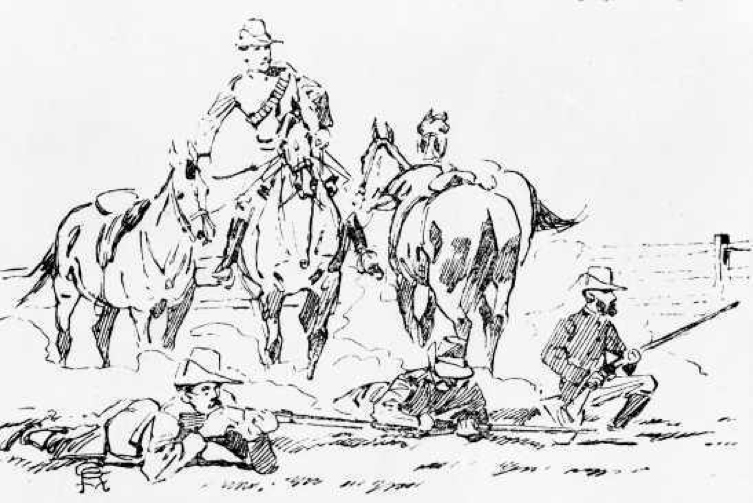 The Blue Force infantry and engineers acting as infantry came to Oakleigh by train on 9th November.The six field guns of ‘C’ Battery, the Nordenfelt battery detachment with its three 10-barrelled guns and the engineers came by road from Melbourne on the 8th and camped at Oakleigh overnight.The next day the engineers started early building a ‘skeleton’ 6 gun redoubt on the rise before Oakleigh and put down six 100 lb. mines on the right front, from which a strong advance was expected. As well, the engineers:

‘had two telephone lines about a mile long, reaching from the base of the defensive positions to its outposts by either flank, and fixed them with the Ader telephone, a new appliance, which was kept in operation all through the action with very good results.’ [37]

Blue Force was under command of Lieutenant-Colonel Thomas Carodac (Tom) Price, [38] with Major Ernest Frederick Rhodes of the Royal Engineers as his staff officer. [39] 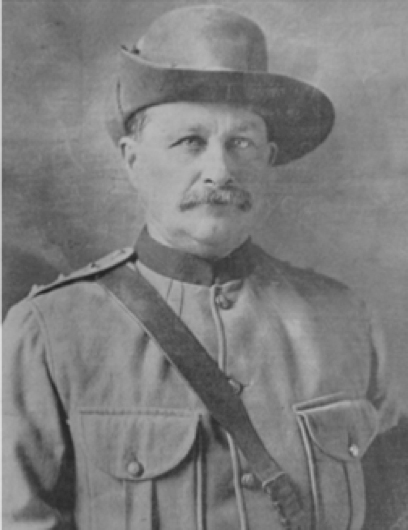 The Militia officers on exercise that day were prominent in social and business circles in Victoria.Many had been born in England or Scotland or Ireland and as noted in the footnotes to this article were generally well known. What of the soldiers? They remain faceless men in the newspaper reports of the day, but it is known that many had carried over their part-time service as Volunteers into the Militia, and a number would have been born overseas, like their officers.They were patriotic working men in the age of Queen Victoria.

One man very likely to be there that day was John William Cordwell, a soldier in the 2nd Battalion, which had as its motto ‘For God and Country’.A carpenter and early trade unionist, he had emigrated from England in 1882, settled in Fitzroy, bought a small cottage and joined the Volunteers and then Militia.

He was a keen rifleman and member of the Victorian Rifle Association, and with his company won a Brassey Field Firing medal in each of 1899 and 1901 competitions as well as being awarded for his service the Volunteer Long Service Medal and Colonial Auxiliary Long Service Medal. Colour Sergeant Cordwell did not see active service in the Boer War or WWI – perhaps because of his family responsibilities with five young children – but continued to serve until 1922, when he was placed on the Retired List as an Honorary Lieutenant. [42] If Cordwell was representative of the men exercising on that day at Oakleigh, then the Militia were of a high standard indeed.

Your ticket for the: The Battle for Oakleigh 1888 Part I