The Oakleigh motel enjoys the distinction of being the first motel built in Victoria.  It was opened in 1957 at 1650 Dandenong Road, Oakleigh.    The owner, Cyril Lewis, had stayed in motels in the United States of America and these inspired his own vision for the motel.  It was designed and built by James Miller.

The advent of motels reflected the rise of family holidays in the motor car and the desire of travellers for more modern accommodation. In contrast to many traditional hotels, motels had “mod cons” such as air conditioning, telephones in the room, and their own bathroom.  It was also a new convenience for travellers to be able to park outside their rooms.

The Oakleigh Motel had a large and colourful external sign in line with the American practice, designed to catch the attention of cars speeding past.  The bright colours and neon lights used in the signage were consistent with the American “Googie” style.  The building, with forty-three self-contained rooms, a dining room and sloping roofline and windows, reflected 1950s building design trends.

The motel was classified by the National Trust of Australia (Victoria) in 2001 and listed on the Victorian Heritage Database.  It has been redeveloped, not without controversy: the façade has been mostly retained but the accommodation units at the back were rebuilt in 2010. 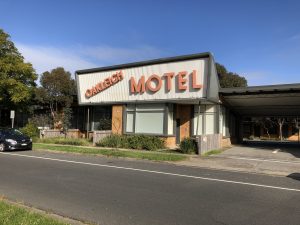 A recent view of Oakleigh Motel.

Your ticket for the: THE OAKLEIGH MOTEL