Brothers Cyril and Ivan Young were both lost to World War II service in very different theatres of war and circumstances. Twenty-seven-year-old Cyril died at Kuching camp, as a prisoner of war of the Japanese; twenty-one-year-old Ivan died in the Middle East, shot down by German forces over Derna. Their remarkable and tragic service stories have been recorded and published on the website Ivan and Cyril Young; forgotten heroes of WWII, created by the Young family (1). What follows of Cyril and Ivan’s service is extracted with permission directly from this website, as are the photographs and other material unless indicated. 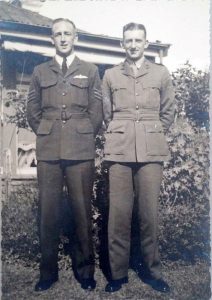 Cyril Young’s service is connected to the fall of Singapore when allied troops surrendered to the Japanese Imperial Army on 15 February 1942. Some 15,000 Australians became prisoners of war and around 1800 had been killed or were listed as missing in action. Those captured at the fall of Singapore were held as prisoners, firstly at Changi and as the war continued in locations across Southeast and East Asia, including Japan. By the end of the war some 8000 Australian prisoners of the Japanese had died in captivity (2).

“Captain Cyril Frank Young, Service Number VX62921, 8th Division Ordnance Field Park, Australian Army Ordnance Corps was one of over 2000 Allied prisoners of war (POW) held in the Sandakan POW camp in north Borneo, having been transferred there from Singapore as a part of B Force. The 1494 POWs that made up B Force, were transported from Changi on 7 July 1942 on board the tramp ship Ubi Maru, arriving in Sandakan Harbour on 18 July 1942.
On 15th October, 1943 Cyril Young, together with the other officers from Australian 8th Division B & E force, were transferred from the Sandakan camp to Batu Lintang at Kuching. Here they struggled to survive in the face of continually decreasing amounts of food supplied by the Japanese during the period of their imprisonment. Captain Young died as a prisoner of the Japanese on 27 July 1945. Cyril Young is buried in the Labuan (War) Cemetery (Borneo). His next of kin was his wife, Enid Laura Young, of South Yarra, Vic” (3).
Ivan Charles Young 1920-1942. Enlisted 20 August 1940, RAAF SN:400402

“Ivan Young enlisted at age 19 and served with the famous RAAF 450 Squadron. He was promoted to Pilot Officer on 31 January 1942. No. 450 Squadron with its own pilots and equipped with Curtiss P-40 Kittyhawk fighters, commenced operations in earnest in February 1942. Over the next 15 months, it fought in the North African and Tunisian Campaigns in both fighter and fighter-bomber roles, claiming 49 German and Italian aircraft destroyed in the air and earning the nickname ‘The Desert Harassers’.”
“In December 1941 the Luftwaffe began upgrading their Mediterranean fighter squadrons with brand-new Bf-109F fighters which could outfly most Allied fighters at high altitude and out-dive and out-climb them. This resulted in the consistently successful German technique of attacking Allied aircraft from above. During 1942 Germany had some of the world’s best fighter pilots, many of whom staffed the squadrons fighting over the Mediterranean Sea and North African desert. One of the most talented was Hans-Joachim Marseille (4).”
Ivan Charles Young’s service with 450 Squadron RAAF contained heroic and harrowing events that saw him being forced to land, having to crash land, and being shot down by German fighters over recently captured enemy territory. His death is recorded occurring at Derna, Libya on 12 June 1942. He has no known grave. The remarkable service story of 400402 Pilot Officer Ivan Charles Young RAAF is captured in detail with photographs by Doug Norrie, historian for Squadron 450 RAAF Association Inc. and can be viewed on the website Ivan and Cyril Young; forgotten heroes of WWII.

The soldier and airman were the only sons of Stanley George Young (1890-1961) and Edith (Olive) Young née Scudamore (1894-1974) who were part of the social fabric of Oakleigh. Olive’s father, Charles Scudamore, was a member of Oakleigh sub-branch Returned Soldiers’ and Sailors’ Imperial League of Australia (now RSL) and both he and her husband Stan were members of Oakleigh Masonic Lodge (5). Most of the Youngs were members of the Presbyterian congregation at St. Andrews, Oakleigh but the family was best known in the community through their business Young’s Hardware. Stan Young was a successful accountant and partner in Melbourne based firm Morton, Watson and Young and it was at his suggestion that his brother Alan purchase an existing hardware business in 1927. Stan Young provided half the purchase price and became a silent partner (6).

The brothers’ homelife at 68 Warrigal Road, Oakleigh had been close, both were educated locally among the early intakes at Oakleigh South (now Hughesdale) State School No. 4176 (7). Following primary education both were students of Scotch College although Cyril initially began secondary education at University High, later gaining a degree at Melbourne University (8). Cyril’s attestation for service claims that he had been a senior school cadet. Once Ivan was reported as missing, in order to filter information to Olive, Stan Young requested that correspondence be directed to his office at 55 William Street. She and Stan had made numerous attempts to secure more concrete information of their son or of ‘his fate and burial place’ with searching letters to the Department of Air, at the same time dealing with the knowledge that Cyril was a prisoner of war (9).

Despite her awful losses and armed with her faith Olive was determined to contribute to community and a focus of her attention for a number of post-war years was the centre for intellectually disabled at Oakleigh. When first formed the organisation known as the Mentally Retarded Children’s Welfare Association opened an Occupational Play Centre in December 1950 operating out of St. Andrew’s Presbyterian Church hall in Drummond Street, Oakleigh. As such it would not have escaped Olive’s attention or that its only regular source of income was a small government subsidy for each child (10). Known as the Oakleigh Retarded Children’s Centre when Olive embarked on her efforts for it, the Centre was aided by the goodwill of the public through groups such as churches, schools, sports club and some individuals. Olive set to fundraising for the Association using her own large home and gardens at 68 Warrigal Road to advantage to launch luncheons and fetes. Her more individualised efforts raised large sums for the Centre and having lost two sons to World War II Olive Young was perhaps hard to refuse (11).

Prior to their enlistment, both brothers…
“Were active in the YMCA camp for underprivileged boys at Shoreham and Cyril Young was the Chairman of the Camp Buxton Committee in 1938. Camp Buxton was on land donated by the Buxton family and was in active use from around 1925 to the early 1970s. After the end of World War II, the YMCA decided to build an open-air memorial chapel to commemorate those members who died in the war and they named it the Cyril Young Open-Air Memorial Chapel. Money to build the chapel was raised from public donations and YMCA members were active in its construction. Stan and Olive Young bore the cost of the pulpit which was dedicated as a special memorial to Pilot Officer Ivan Young. The Memorial Chapel was opened on 22 December 1951. However, in the 1980s the YMCA sold Camp Buxton and the original buildings are now distributed on four privately owned blocks of land (12).”
Family members, Cyril and Ivan’s cousins Lois Young and Carol McIvor and others are actively trying to have the memorial area restored through the Cyril Young Memorial Chapel Association (CYMCA). According to Lois ‘the local shire sold off a portion of the memorial land but has accepted the need to buy it back’. Part of the Chapel site remains in private ownership. There has been a continual effort by the CYMCA Committee over the past year for the Chapel land to be fully acquired and consolidated by Mornington Peninsula Shire Council but the matter remains unresolved (13). 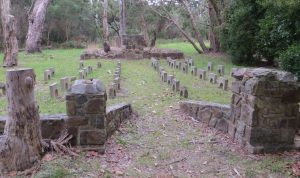 The Cyril Young Memorial Chapel viewed from its entrance towards the stone lectern in Buxton Reserve. Source: Source: http://shoreham.vic.au/strategic-planning

The Cyril Young Memorial Chapel is listed on the Victorian War Heritage Inventory and extensive information on the chapel is available on the family’s website and is well worth viewing. It is an open-air chapel created from local Moorooduc stone within Buxton Woodland Reserve in Shoreham. Little to represent the Youngs remains at Oakleigh however. The Youngs’ home at Oakleigh was demolished in 1965 to make way for the Warrigal Road railway overpass. Completed in 1968 it spared motorists the congestion experienced at the Warrigal Road rail crossing but necessitated the demolition of shops and houses along the east side of Warrigal Road. The properties were acquired by the Country Roads Board in order to achieve the necessary embankments. In recent years the business of the hardware store known as Young’s at 29 Portman Street, Oakleigh was closed.
At Scotch College in Hawthorn the memory of Cyril and Ivan Young is honoured each Remembrance Day.
Lest we Forget

1. Ivan and Cyril Young; forgotten heroes of WWII, at https://sites.google.com/view/ivanyoung/home
2. https://www.dva.gov.au/newsroom/media-centre/media-backgrounders/fall-singapore
3. Ivan and Cyril Young; forgotten heroes of WWII, at https://sites.google.com/view/ivanyoung/home
4. ibid
5.The Argus, 30 March 1937, p. 1.
6. Carol McIvor provided the information of the establishment of the business in 1927 from the story of Youngs’ Hardware Stores recorded by family member, Gordon Young.
7. An article in the local Times 13 September 1945 reported the death of Cyril indicating being students at what is now Hughesdale Primary in Brine Street.
8. Information courtesy Lois Young who advises that Cyril went to University High until the end of the 9th grade, then to Scotch for the years 1932 to 1934. He then did a degree at Melbourne University. Ivan attended Scotch from 1932 to 1937.
9. NAA Service Records, Series A705, Young, Ivan Charles.
10, First Annual Report of MRCWA, 12 October 1951.
11. Some examples of the efforts of Mrs S. G. (Olive) Young are found in minutes of the Mentally Retarded Children’s Welfare Association. Recorded in the General Meeting, 14 March 1958, unpaged, the sum of £105; General Meeting 13 February 1959, page 75, £256; Tenth Annual Report, MRCWA, 21 October 1960, pages 3, 9, £444; and General Meeting, 9 April 1965, page 245 – Olive Young’s card afternoon at 9 Darling Street, 200 ladies attended with Dr Cunningham Dax as speaker. £262 raised for the Centre.
12. Ivan and Cyril Young; forgotten heroes of WWII, at https://sites.google.com/view/ivanyoung/home
13. See Shoreham Community website, Cyril Young Memorial Chapel: http://shoreham.vic.au/cyril-young-memorial-chapel

Your ticket for the: The Young Brothers: A World War II Tribute