History Monash > WHY “ON BROADWAY”? 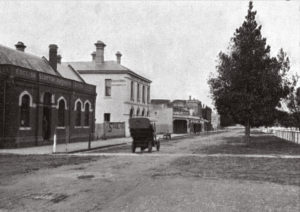 Why is the History Monash Inc (HM) member journal entitled “On Broadway”?

No, it is not because we aspire to having our own stage show.  The Broadway was in fact an early name for part of what is now Dandenong Road, between Warrigal Road and Atkinson Street.

In her book, Taking Its Place – A History of Oakleigh, Helen Gobbi (HM Historian and Vice-President) notes that in the 1860s, this road was known as “the Broadwood” and was the main street of Oakleigh. This area featured weatherboard shopfronts with residences behind, mostly on the northern side of the road between Drummond and Atkinson Streets.  Although serving also as a stock route between Gippsland and Melbourne, The Broadwood was envisaged as an avenue and was planted with elm trees in the last years of the nineteenth century.  In the centre of the road, gardens were planted  and the name was changed to “Broadwood Parade”.

In 1901, Broadwood Parade was renamed to “Broadway”, which is what locals had been calling it informally.  A decade later, Broadway was looking less like a mixed residential and retail area, and more like a predominantly business precinct. By the late 1930s, motor cars were replacing horse drawn coaches and the removal of native eucalypts erased any rural appearance of the road.

The ultimate name change for this road came in 1946.  The Country Roads Board took on responsibility for maintaining the road as a section of the Princes Highway, but it is more often simply known as Dandenong Road.

Thank you to Helen Gobbi for providing the above information in her book Taking Its Place – A History Of Oakleigh 2004.

Your ticket for the: WHY “ON BROADWAY”?